Routing in the UK has some differences compared to the rest of the Eurocontrol member states. The Eurocontrol system is designed to tell you whether a route is acceptable to ATC or not. Generally, if you manage to get a route through IFPS and you like its profile, you are ready to go and you can rely on being able to more or less fly the indicated route or something better.

For historical reasons, the UK airspace design and ATC procedures differ. As everywhere in the world, ATC services are only available in controlled airspace (CAS), i.e. airspace A-E. In the UK, there is relatively little CAS, mostly along the main routes (airways). The rest is airspace G up to sometimes a very high level (from a GA point of view). This can be found in many other countries, e.g. in Africa where only the main routes are covered by airways. However, the UK system is not as restrictive as African ATC where you are forced to remain on the scarce airways. You are allowed to fly IFR pretty much everywhere with a great deal of freedom. This means that DCTs (i.e. off airway routes) almost always validate with IFPS.

A classic Eurocontrol routing engine would therefore make use of these permitted DCTs to shorten the route. However, there are three practical issues to this approach, having to do with the “loose” integration of the UK system into Eurocontrol:

Now one could just use the same solution as in the African countries mentioned earlier: stay on airways and not bother with DCTs. Unfortunately (or fortunately!) this does not work for the UK. First of all, the airway network in the UK really is very sparse and built around the major airline routes so staying on airways at all cost might produce terrible routings. Secondly, often it is just impossible to connect two airports without the use of DCTs. This applies to airports that reside OCAS (e.g. Biggin Hill in G) but also to other airports where a few DCTs might be required to make a route possible.

The autorouter has to be able to distinguish a “good” DCT from a “bad” DCT. For this, it has to rely on a technology that was common in the days before CFMU/IFPS was introduced at Eurocontrol: the good old fashioned Standard Route Document (SRD). This is a booklet that air navigation service providers (ANSPs) would issue and contains a list of recommended routings for a combination of departure and destination airport as well as desired altitude band. UK NATS make a SRD available and update it every 28 days for the AIRAC cycle.

Internally, the autorouter works by comparing options and assigning penalties to turns. For UK airspace, we assign a heavy penalty to DCTs. However, when we look at a DCT that is mentioned in the SRD, we use a “negative penalty”, meaning we give it a strong preference, even over an adjacent airway route. The most recent SRD as published by NATS is always integrated into the autorouter database.

As a novel feature in IFR routing, we make it transparent to the user what a standard route segment is. They are marked in the route display with blue dashes in the segment line. 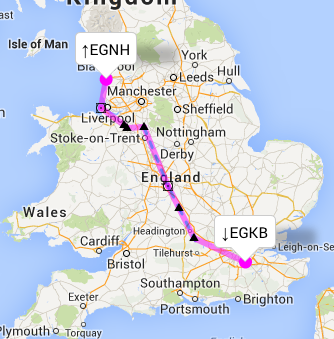